I recently watched Avengers: Age of Ultron. As always, before the feature presentation, there were various trailers. One in particular piqued my interest: the trailer for Ant-Man.

To tell you the truth, I had never heard of Ant-Man before. I wasn’t sure if he was an actual comic book hero or if he was just invented to make some money at the box office.  (I later discovered that Ant-Man first appeared in a Marvel comic book in 1962).

As a bug guy, I couldn’t help but think about the characteristics of ants: their diet, nesting, behavior, etc. Then I thought, “if I treated a house, would the products I applied hurt Ant-Man?” (I know, I’m a weirdo.  The other trailers didn’t interest me as much so I had a couple minutes to think; a potentially dangerous situation.)

I then remembered that Ant-Man’s nemesis is Yellow Jacket. Yellow jacket, just like Ant-Man, is a human who wears a powerful suit that gives him very cool powers and allows him to shrink to the size of an insect.

That made me think, “if Ant-Man hired us to help him save the world from Yellow Jacket, what would the treatment plan look like?” In order to answer that question, an analysis of Ant-Man and Yellow Jacket’s characteristics, including strengths and weaknesses, is appropriate. 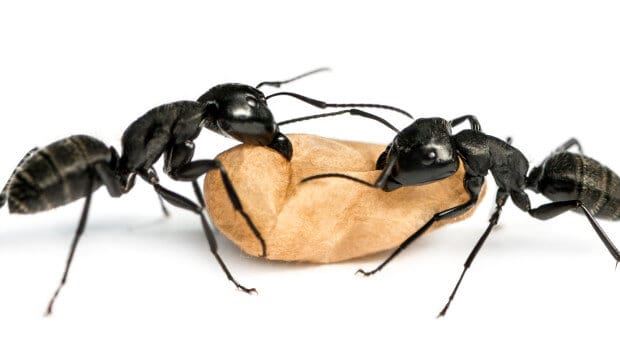 If Ant-Man were a regular ant, which, for obvious reasons he is not, he would likely be a carpenter ant.  I have no reason to support this conclusion except for the tenacity that I image Ant-Man has.

Let’s a look at some of the other characteristics of carpenter ants:

While proof. Pest Control technicians are experts at solving carpenter ant problems, we would never do anything to harm Ant-Man! Now Yellow Jacket, he’s a different character altogether.

Like ants, yellow jackets, are social insects. They live in colonies which contain workers, queens, and drones.

While fertilized queens will overwinter, all other members of the colony will die. Such queens look for cover during the winter in areas including hollow logs, bark, leaf litter, soil cavities, firewood, and man-made structures.

Once the weather starts warming up, the queens will identify a location and begin constructing a small paper nest to lay their eggs in. After the queen feeds the young larvae for 20 days or so, they emerge as young, infertile females called worker bees. 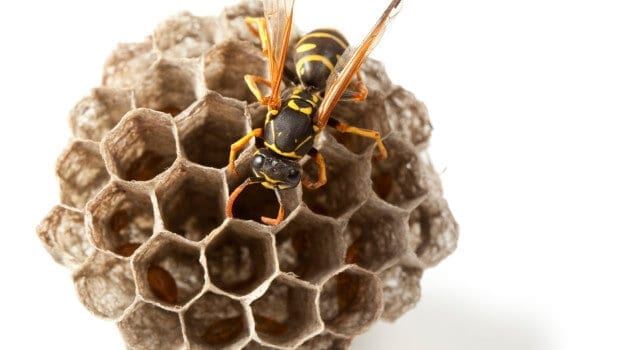 Biologically speaking, Yellow Jacket’s story would be more believable if he were female (setting aside the fact that we are talking about a man who puts on a suit which gives him super human powers and shrinks him to the size of a bug). This is because males die after mating with the queen. The females are the ones buzzing around bothering everyone. Maybe Marvel should reconsider this important detail before the movie arrives in theaters July 17, 2015. Just sayin’.

The first step in keeping yellow jackets from causing a problem around your house, and to help Ant-Man defend against Yellow Jacket, is to inspect your premises. Walk around your home looking for small paper wasp nests in late spring to early summer.

Yellow Jacket might help construct a paper wasp nest under the eves and overhangs of your house-particularly in the corners, on swing sets, and in pipes and vents that extend outside the structure of your house. A nest at this time of year is likely an inch to a few inches in diameter.

For the second step, a pest control expert is likely necessary. Once a nest is located, it must be removed and the queen must be killed. Yellow jackets, just like Yellow Jacket, can be very aggressive if disturbed.

Once the nest is removed and the queen (and any workers) killed, the pheromones should be eliminated. Wasps are attracted to pheromones as is evidenced by the tendency for nests to appear in the same locations year after year. Eliminating the pheromones can be helpful in discouraging the re-occurrence of a yellow jacket infestation.

Ultimately, there are many strategies that can be used to assist Ant-Man in his fight against Yellow Jacket. Luckily for us, good ALWAYS defeats evil in the end (well, it does in Marvel’s world). I am guessing, that Ant-Man is no different. (Just so you know, regardless of what happens in the movie, Yellow Jacket would mess Ant-Man up in real life).